Holland's first novel documents the travels of Brian Holliday, an overworked executive who buys a dilapidated farm in Vermont simply looking for a place to unwind.  He accidently finds a gateway on his property that leads him to another place, where he learns that he is the subject of an ancient legend and has been tasked with the responsibility of picking three individuals from his home world to help him close the gateway.  He has no intention of accepting this responsibility, but his experiences and the beings he meets drag him slowly, inexorably into a role he is not prepared to handle.

Holland Phillips writes novels and books as much as he writes music.  From a Science Fantasy series to pre-dystopian and coming of age novels, Holland is as prolific with the written word as he is with an instrument, and has been writing creatively for many years.  He currently describes his novels as "nothing more than a documentation of what goes on in my naturally distorted mind."  However it got from there to the written page, Holland's novels are always an adventure. 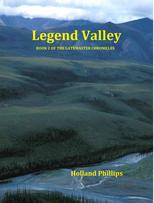 Legend Valley is the second in the Gatemaster series.  Brian - now Tasarian - is bruised and battered, and quite changed from his earlier self.  He attempts to gather the heroes that will help him close the final gate.  At the same time, dark forces gather to take the gate by force.  Will he have enough time to close it, or will the coming battle determine who eventually controls the gateway between this world and that one?